The irony of the Taliban attacking Facebook for banning its content — even as its fighters attacked journalists trying to get flights out of Afghanistan — and then getting a shout-out from Donald Trump Jr. may seem like a minor storyline in the dramatic plot unfolding following the US withdrawal after 20 years of war. And yet, it points to a broader set of issues about the relationship between social media and political power that are worthy of consideration. Part of the story of the Taliban’s momentum to retake Afghanistan is the story of its use of Western social media platforms to regain power.

When Taliban fighters entered the presidential palace in Kabul, they were armed not just with American weapons, but also with smartphones they used to capture their victory on video and share it to the world via U.S. social media networks. Social media is central to contemporary conflict. Indeed, despite its designation as a terrorist group subject to U.S. sanctions that prohibit American companies from providing materials support or services, the Taliban has been on Facebook, Twitter, and YouTube for at least a decade, and has used WhatsApp, Telegram, and Clubhouse chatrooms as part of its public relations strategy.

Over the twenty years of the US-led “war on terror” in Afghanistan, the Taliban has developed a polished social media presence that includes publishing statements on Twitter, integrates video, and highlights its news and views in Arabic, English, Pashtu, Turkish, and Urdu. Like ISIS, it maintains a robust digital presence that has included a website, videos of sermons on YouTube, official statements on Twitter and YouTube, and WhatsApp and Telegram groups for communication.

“The media is a basic and important part of the ongoing war between us and the occupation enemy. [Winning] the media war means, perhaps, winning more than half the war,” Qari Yousef Ahmadi, a Taliban spokesman said in a 2012 interview. “More important than visiting websites is winning over the minds and hearts of the masses who visit websites.”

Tech platforms have faced a lot more pressure to take down terrorist and violent extremist content after ISIS proved adept at leveraging them for its propaganda efforts. In 2018, Facebook, Twitter, and Google joined up with a handful of other companies to create a shared database that would make it easier to remove ISIS and other terrorist videos and images across the internet. They created the Global Internet Forum to Counter Terrorism (GIFCT) to house a shared database of hashes, or digital fingerprints, that correspond with offending content and could be used to pursue the goals of many companies and governments to try to eradicate terrorism from the internet.

“Content produced by the Taliban that glorifies terrorist acts, depicts graphic violence against defenseless people, contains imminent credible threats, or seeks to recruit or instruct followers for violence qualifies to be included in GIFCT’s hash-sharing database based on the Taliban’s inclusion on the United Nations Security Council’s consolidated sanctions list,” a GIFCT spokesperson told me in response to my question about whether any Taliban content had been added to the hash database. “Each GIFCT member company then determines its use of the database in line with its platform’s policies. We are remaining in close contact with our network of experts, tech company members, and stakeholders as the situation rapidly develops in order to identify how the online threat landscape may evolve.”

Tech firms scrambling to step up enforcement after the fact is too little, too late when their platforms have already been used to build power.

I reached out to several tech companies to get further clarity on how long the Taliban has been on their platforms and whether they have policies regarding the transition of official governmental and political accounts. But I only got boilerplate replies that offered no additional detail on why these policies appeared to only now be enforced or how they handle official accounts. This is not the first time the companies have had to consider this question – several of Burma’s military-affiliated Facebook accounts were banned following the coup there earlier this year, but it is not clear what happened to the official accounts of the civilian government.

“We’re obligated to adhere to U.S. sanctions laws. This includes banning accounts that appear to represent themselves as official accounts of the Taliban,” a WhatsApp spokesperson told me. “We’re seeking more information from relevant U.S. authorities given the evolving situation in Afghanistan.”

Although there is a process for officially handing over the handles such as POTUS, the White House, and other official U.S. government accounts, it appears that social media companies are yet again caught in a rapidly evolving situation where they lack existing policies, haven’t thought about the context outside the U.S., and have to make it up on the fly.

Taliban spokesperson Zabihullah Mujahid criticized Facebook for restricting “freedom of speech” in Afghanistan and twisted a question raised at a press conference on Tuesday about the Taliban’s perspective on freedom of expression in the country by responding that Facebook should be asked the same question. He sounded not unlike Republicans defending Donald Trump after he was deplatformed for inciting violence at the U.S. Capitol on January 6th. Indeed, Donald Trump, Jr. tweeted out his agreement with the Taliban official.

The Taliban spokesman got a question about freedom of speech and he said the question should be asked to US companies like Facebook who claim to promote it while still censoring pic.twitter.com/woXd5RRCWK

As I’ve argued elsewhere, social media platforms should apply a higher standard to the accounts of world leaders and should indeed police those who seek to use their products to manipulate and target their citizens and shape global public opinion towards authoritarian ends. But the issue of whether the Taliban can or should have access to tech platforms seems to be less of a principled one than it is a legal one, said one executive at a tech company that does not host user-generated content.

“The way sanctions work on any US company, on any US provision of services, if they are sanctioned they can’t have a US registrar, they can’t be on a .com, they can’t be hosted from a US site, go down that whole tech stack,” they explained on background, since they did not want the company’s name in a story that applies to all US-based companies. “I imagine most players in the space do some sort of screening for sanctions.”

U.S. companies and organizations are required by law to comply with U.S. sanctions. In practice, this means checking the names of individuals and organizations against a Treasury Department database. The Office of Foreign Assets Control lists the Taliban in Afghanistan as an entity designated on the Global Terrorism Sanctions Regulations, but Mujahid, the Taliban spokesman, is not listed in the OFAC database.

The Taliban has been designated as a terrorist organization for several years.

“The situation in Afghanistan is rapidly evolving, and we’re witnessing people in the country using Twitter to seek help and assistance,” a Twitter spokesman told me in an email that failed to respond to a set of detailed questions. “We will continue to proactively enforce our rules and review content that may violate Twitter Rules, specifically policies against the glorification of violence and platform manipulation and spam.”

A screenshot shows that an official Taliban account, which was started in 2011, was still available in 2014 and tweeted about its victories against American “terrorists”. (Via the WaybackMachine)

YouTube’s violent criminal organizations policy prohibits content that is produced by, praises, justifies, or recruits for violent organizations, and a spokesperson told The Verge that it was terminating any accounts it found to be owned and operated by the Taliban. Yet people have lamented for years that YouTube recommendation algorithms promote extremist content, including Taliban speeches.

Facebook said that the group has been banned for years due to U.S. sanctions policy and under the platform’s Dangerous Organization policy, which was recently updated in the wake of President Trump’s role in the insurrection at the U.S. Capitol.

“This means we remove accounts maintained by or on behalf of the Taliban and prohibit praise, support, and representation of them,” said a Facebook company spokesperson. “Facebook does not make decisions about the recognized government in any particular country but instead respects the authority of the international community in making these determinations. Regardless of who holds power, we will take the appropriate action against accounts and content that breaks our rules.”

While most attention has focused on the major social media platforms, if ISIS’ use of social media and digital networks for its propaganda and recruitment efforts has taught us anything, it’s that there is an entire ecosystem of platforms that are used to create and disseminate information around the world.

A screenshot shows how the Taliban used social media to put out official communications.

There are a lot of unanswered questions about whether tech companies have the policies in place to deal with the ousting of a president or the overthrow of an elected government, despite the fact that this is the second time this year that Facebook, Google and Twitter have had an important role in a violent coup. And it is clear that violent extremism continues to thrive online, whether or not an entity appears on a designated terrorist list. The Taliban is already popping up again with new accounts on Facebook, Twitter and YouTube despite being banned by those platforms.

But the real lesson is that the damage is done long before a group like the Taliban takes power, and long before QAnon flags are flying on the steps of the U.S. Capitol. Tech firms scrambling to step up enforcement after the fact is too little, too late when their platforms have already been used to build power. That is a lesson the world learns again and again, but one that social media platforms refuse to acknowledge. 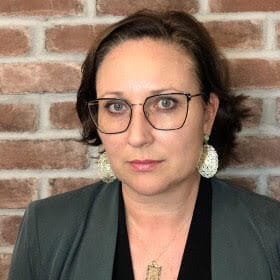 Dr. Courtney C. Radsch is a journalist, author and advocate working at the nexus of technology, media and policy. She had led media assessment and advocacy missions to more than a dozen countries and worked as a journalist in the U.S. and Middle East. She holds a PhD in international relations and is the author of Cyberactivism and Citizen Journalism in Egypt: Digital Dissidence and Political Change. Her commentary and analysis has been published in leading outlets around the world.