For the past six years, an independent research program at New America called Ranking Digital Rights has evaluated the policies and practices of some of the world’s largest technology and telecom firms, producing a dataset that reveals their impact on human and digital rights. This year’s evaluation, released today, finds Twitter at the top of a “failing class” of companies that broadly fail to meet the standards Ranking Digital Rights has set forth for tech firms to “respect human rights, strengthen democracy, and promote equity and justice for people everywhere.”

Ranking Digital Rights evaluates more than 300 aspects of each company it ranks that fall broadly in to three categories: governance, freedom of expression, and privacy. Ironically, Ranking Digital Rights finds Twitter in the top position largely due to its showing in the “freedom of expression” category, “which focuses on the kinds of actions companies take to moderate and curate content, suspend and remove accounts, and respond to government and other third-party demands.” Twitter was purchased Monday by billionaire Elon Musk, who has faulted the company for its policies on speech and content moderation, criticizing and prompting the harassment of executives involved in its policy decisions.

But despite its top spot, at 56% on the scorecard Twitter fails to pass muster according to the Ranking Digital Rights methodology. Bottom on the list are Amazon and the Chinese tech firm Tencent.

Amazon is ranked lowest in part because of a lack of transparency. Ranking Digital Rights assesses that it is the “least transparent U.S.-based platform,” and that it is outperformed by “Russian, Chinese and Korean based platforms.” Ranking Digital Rights also faults the company for cutting off its services to Russia and Belarus following the Russian invasion of Ukraine, moves the company reportedly took without conducting “human rights impact assessments prior to imposing these measures.” The company announced its restrictions following sanctions led by the U.S. and Europe intended to punish Russia’s invasion of Ukraine.

One entity that ranks above Amazon is Russian social media conglomerate VK, which includes Russian email and cloud services Mail.Ru and the social media platform VKontakte. The report notes that key staff and shareholders of the company are closely tied to Vladimir Putin, and that the company lost ground on measures related to freedom expression and privacy.

Ranking Digital Rights makes a number of policy recommendations to tech firms and to governments. Chief among them is that “policymakers should pursue a wholesale ban on surveillance advertising.”

“We’ve been saying it for a while, but it bears repeating: the social ills that we associate with digital platforms—hate speech, disinformation, election interference, and more—are fundamentally connected to the surveillance advertising business model that fuels companies like Alphabet, Meta, and Twitter,” wrote Nathalie Maréchal, Policy Director at Ranking Digital Rights.

Other recommendations focus on corporate transparency, human rights diligence and independent auditing, ending multi-class share structures that have disadvantaged some shareholders in large tech firms, and the repeal of rules in the United States that “hinder shareholder action on human rights.” 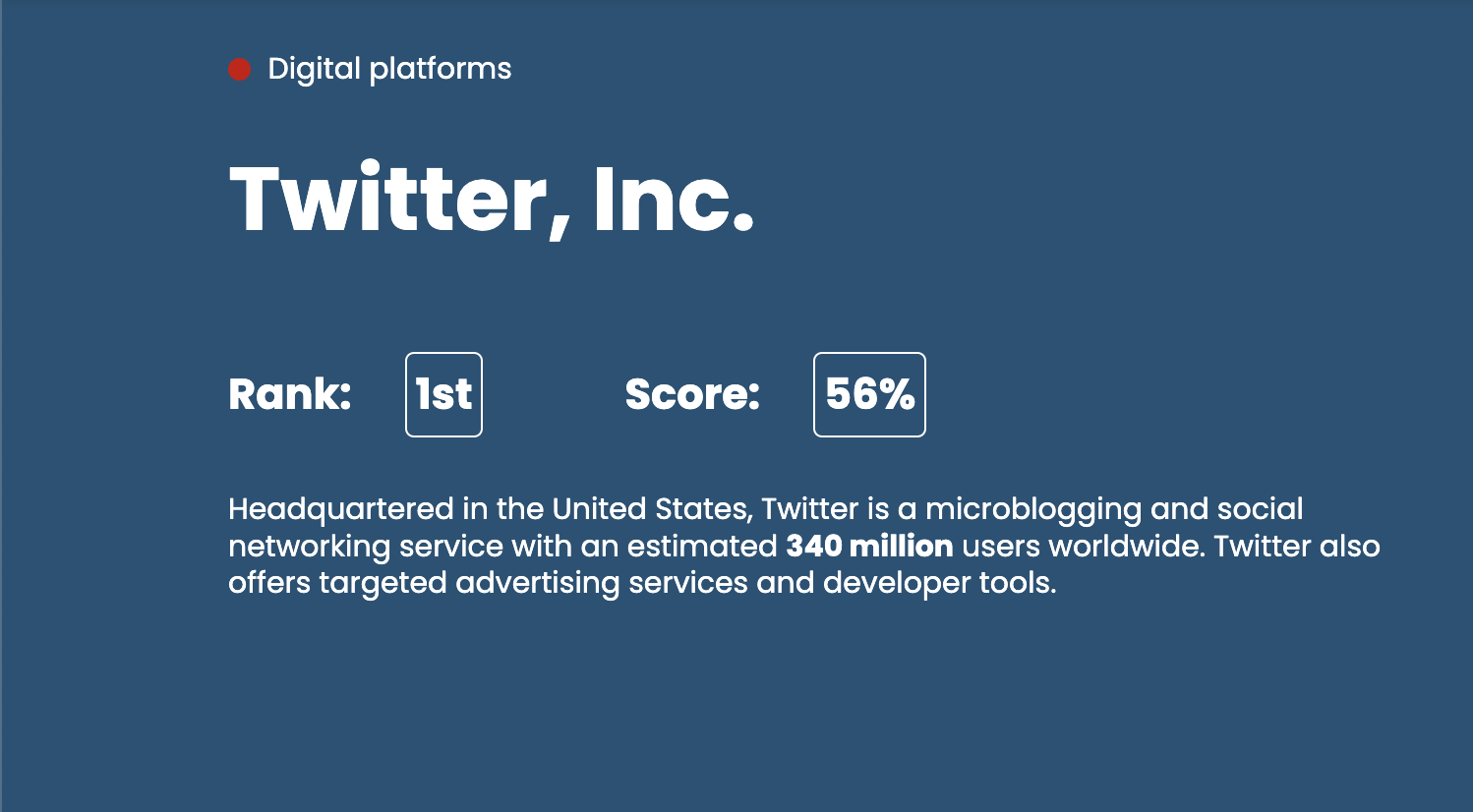 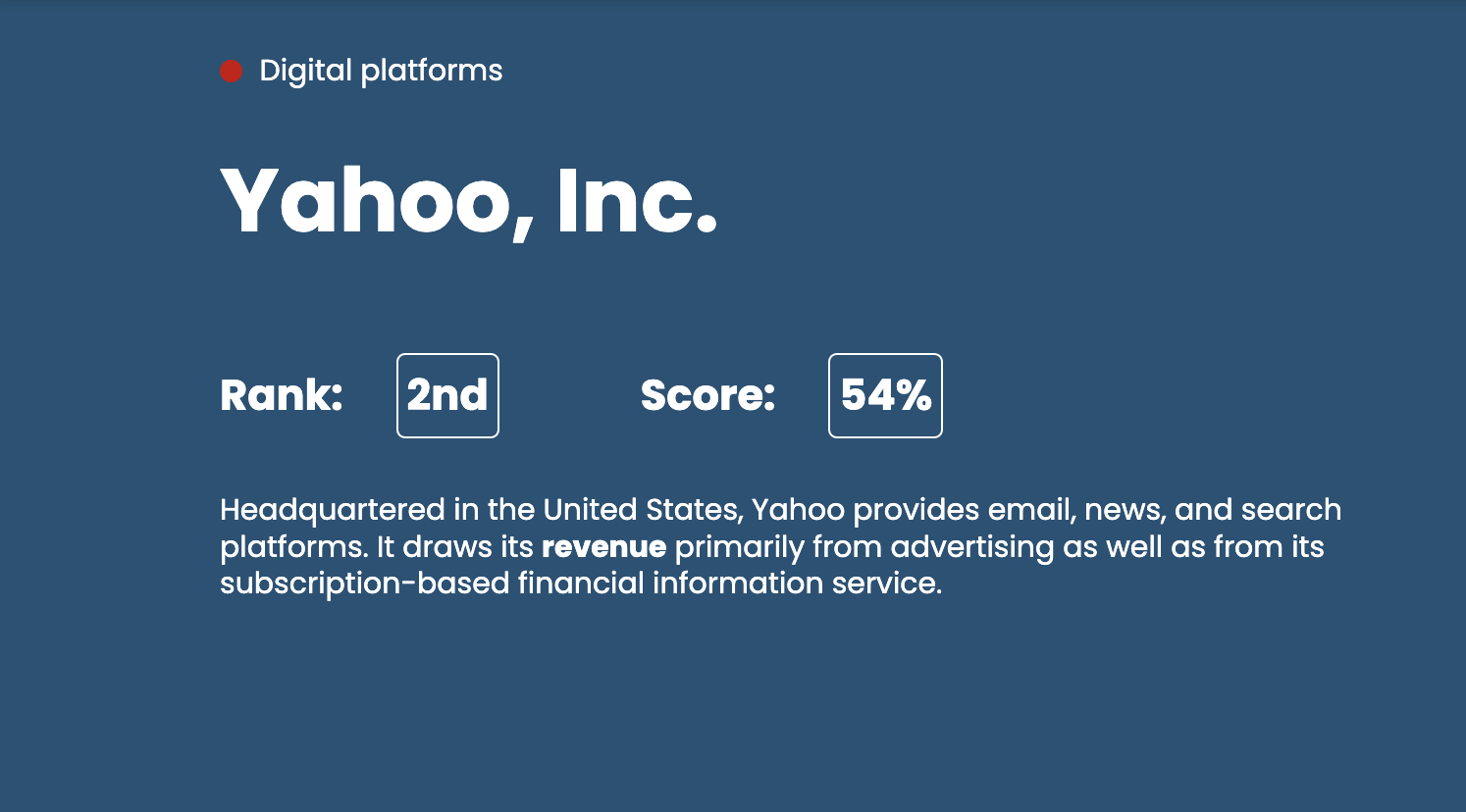 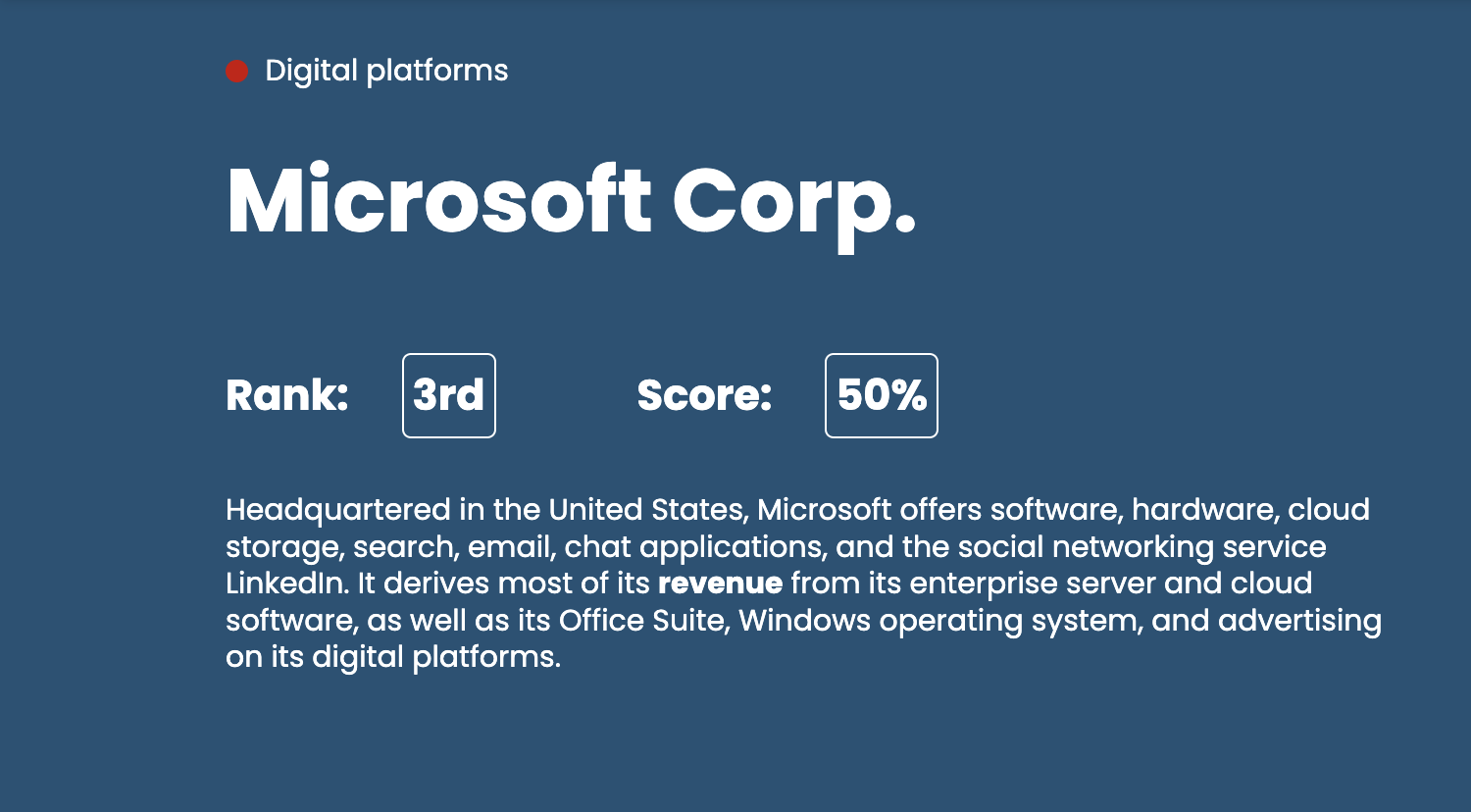 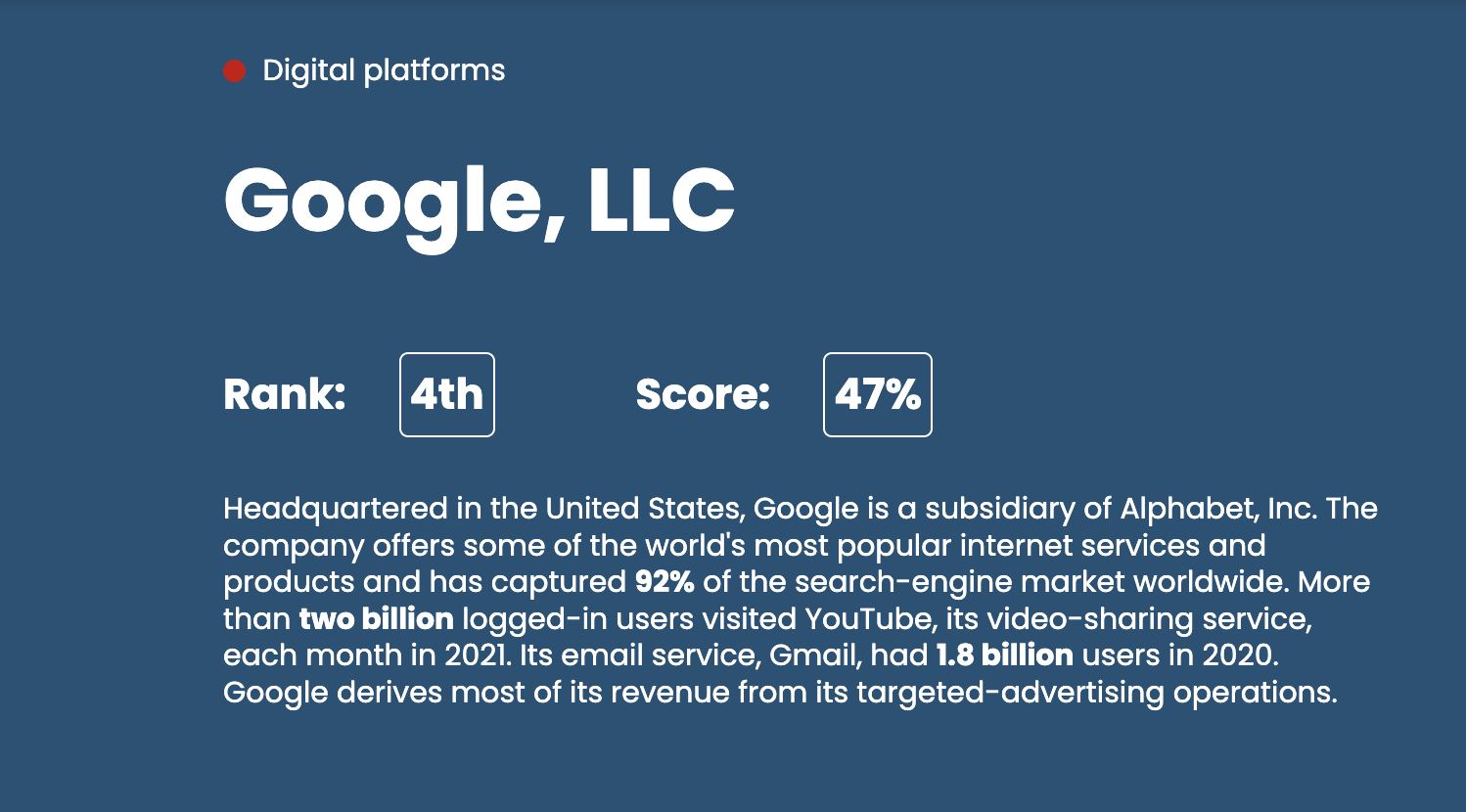 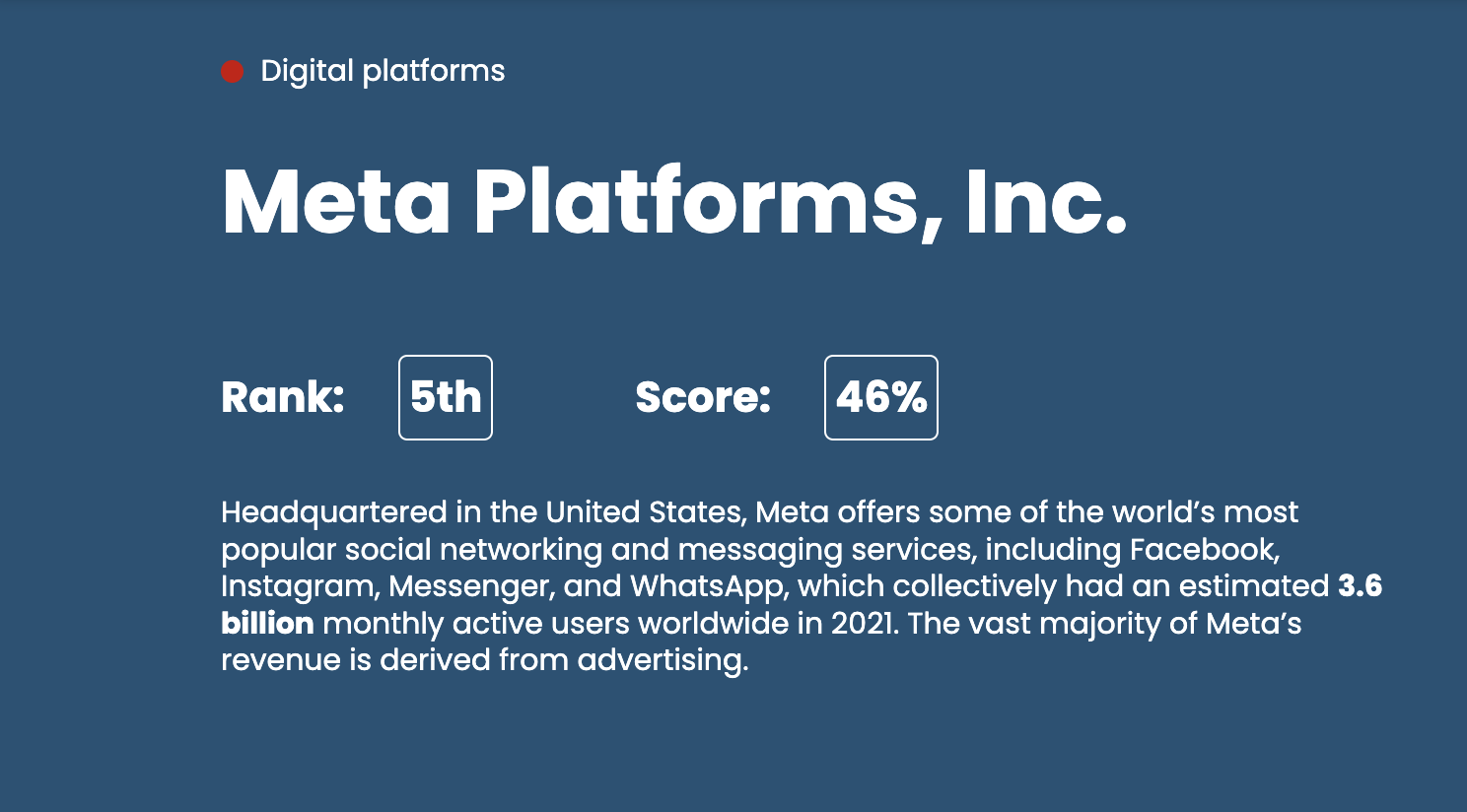 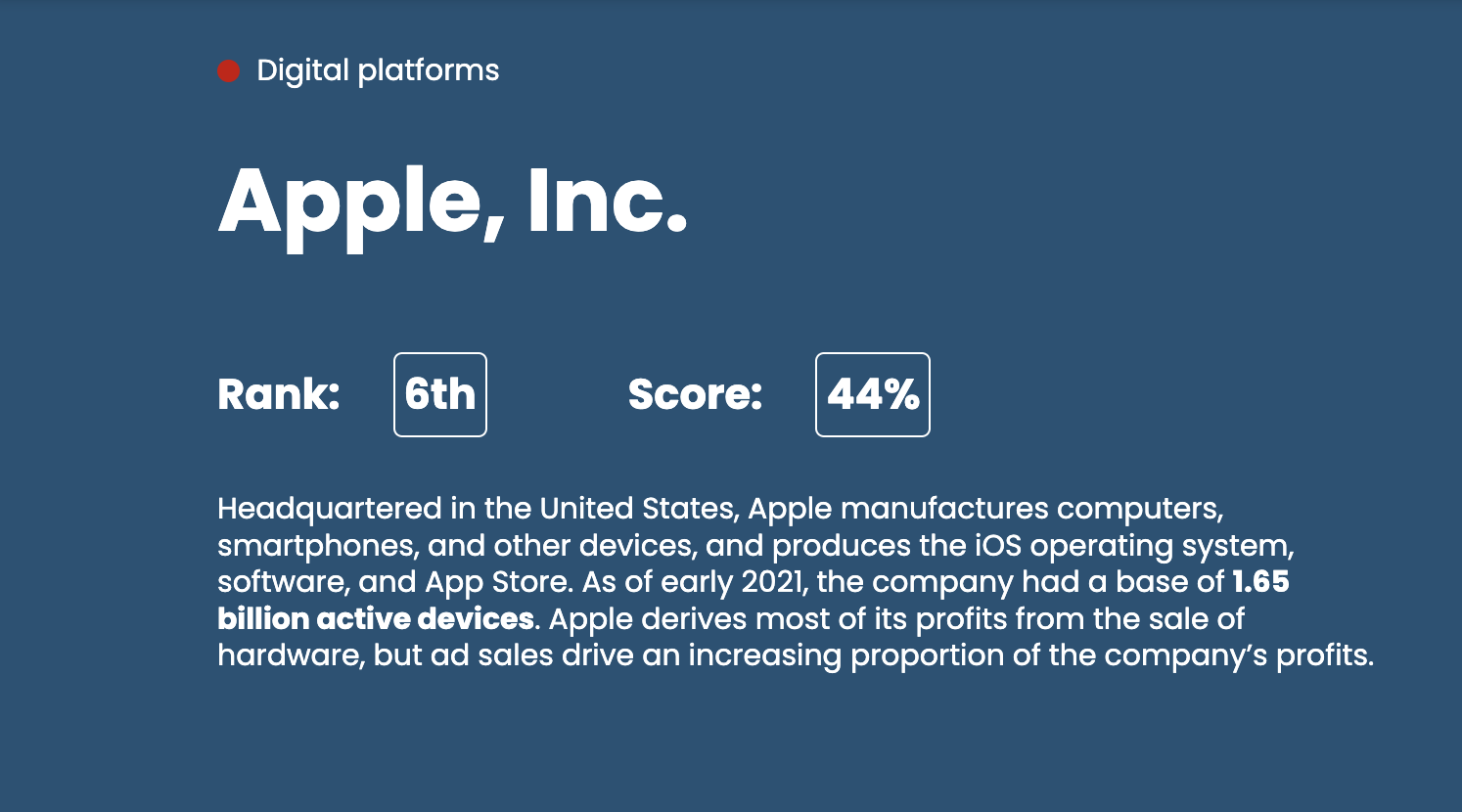 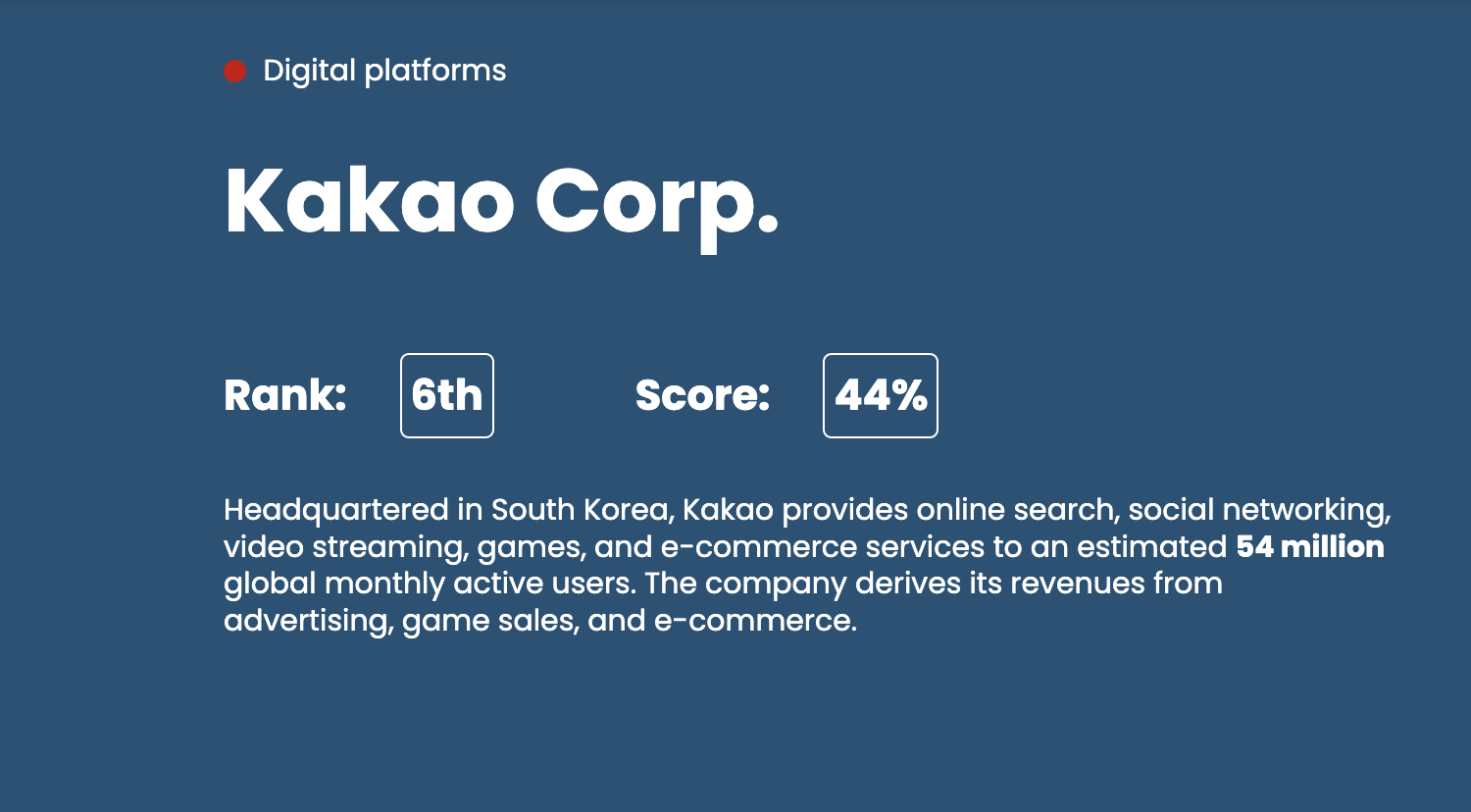 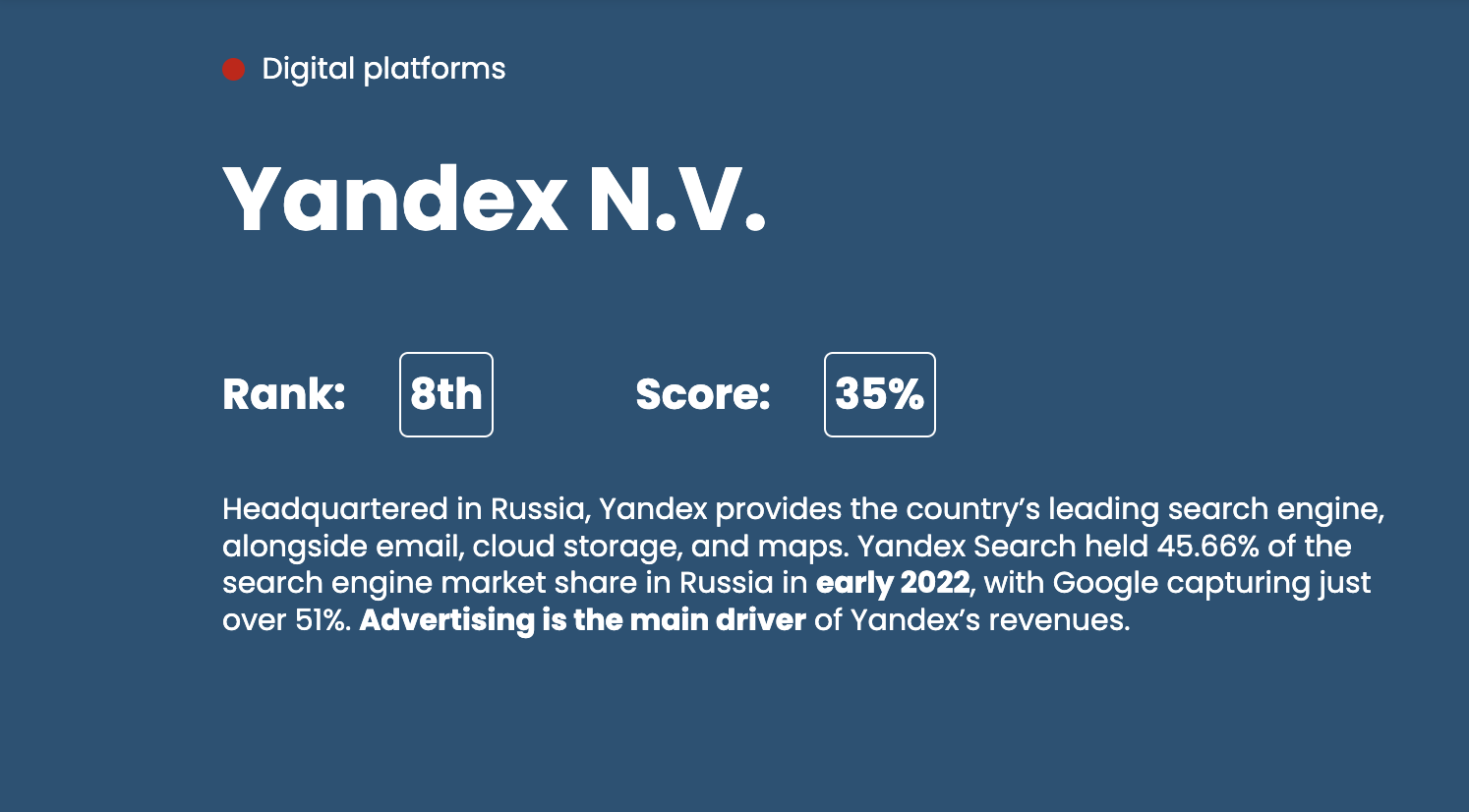 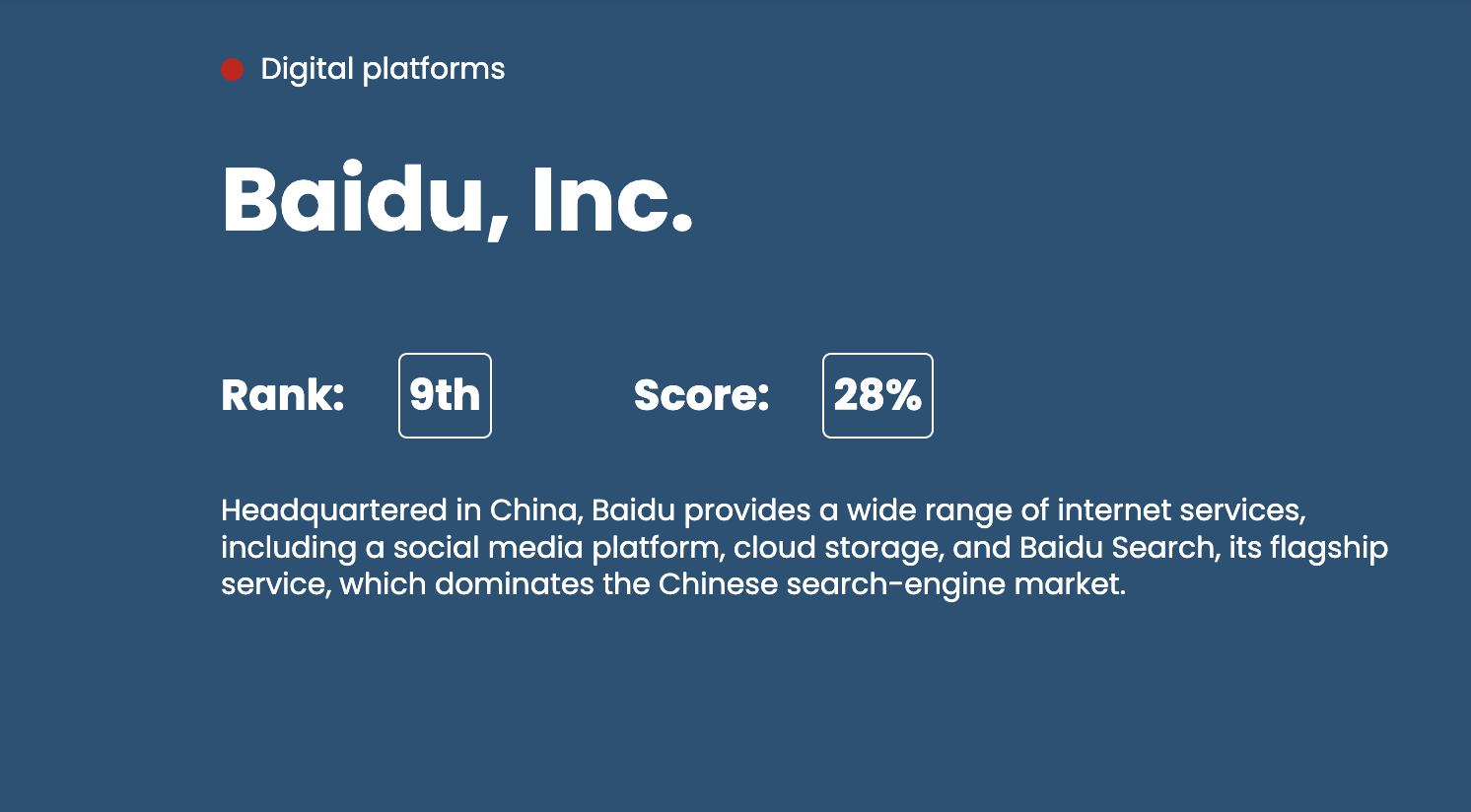 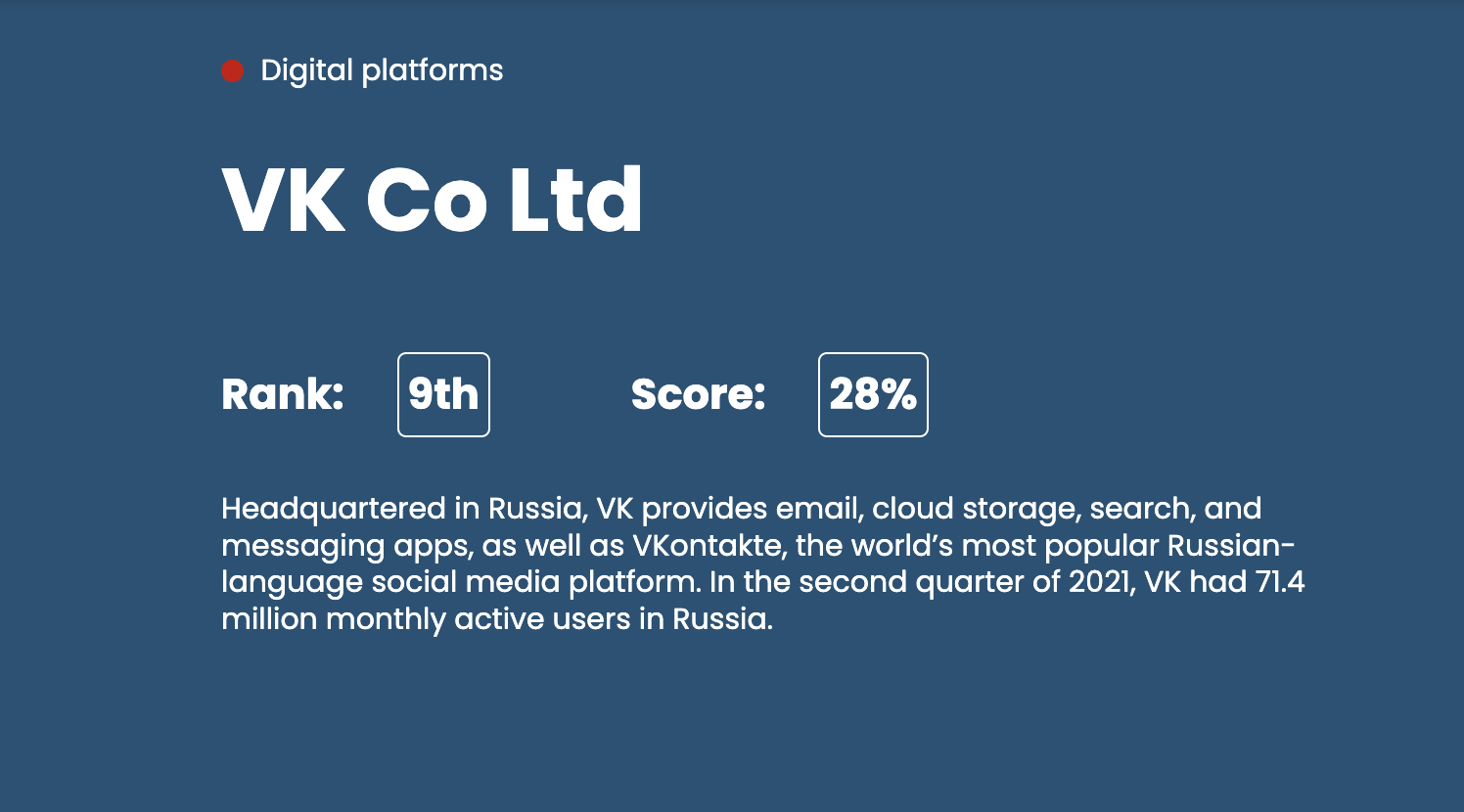 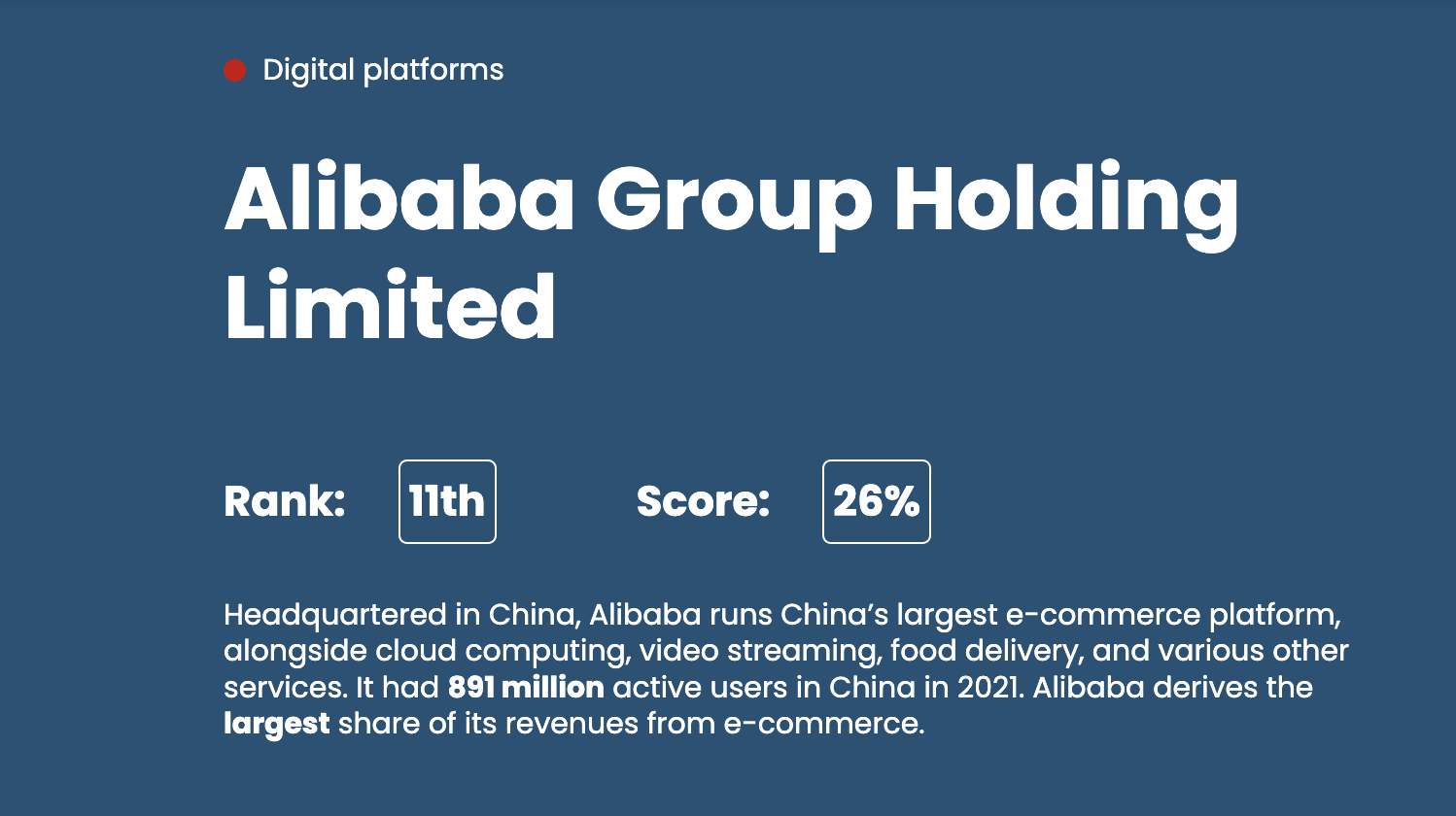 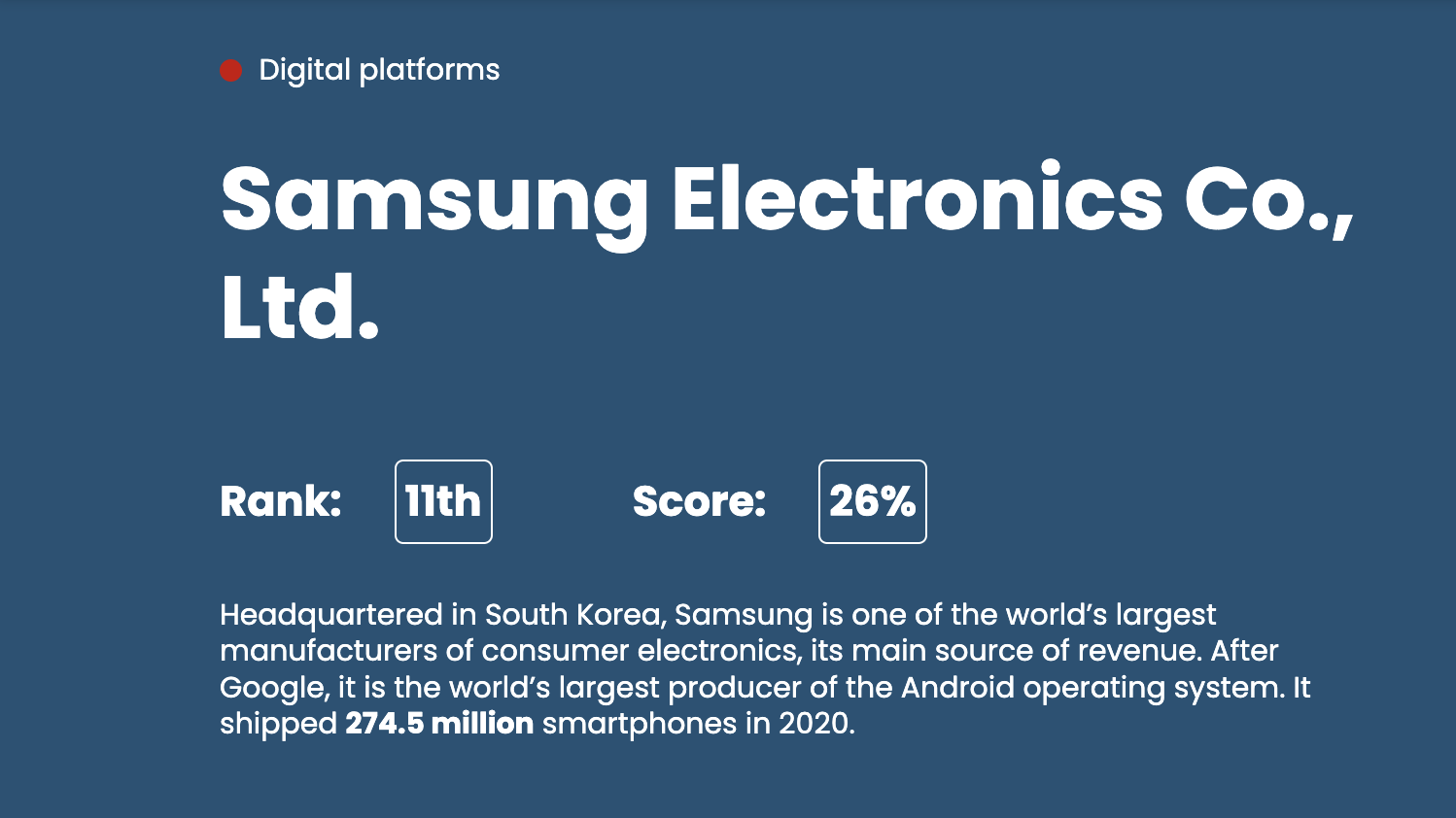 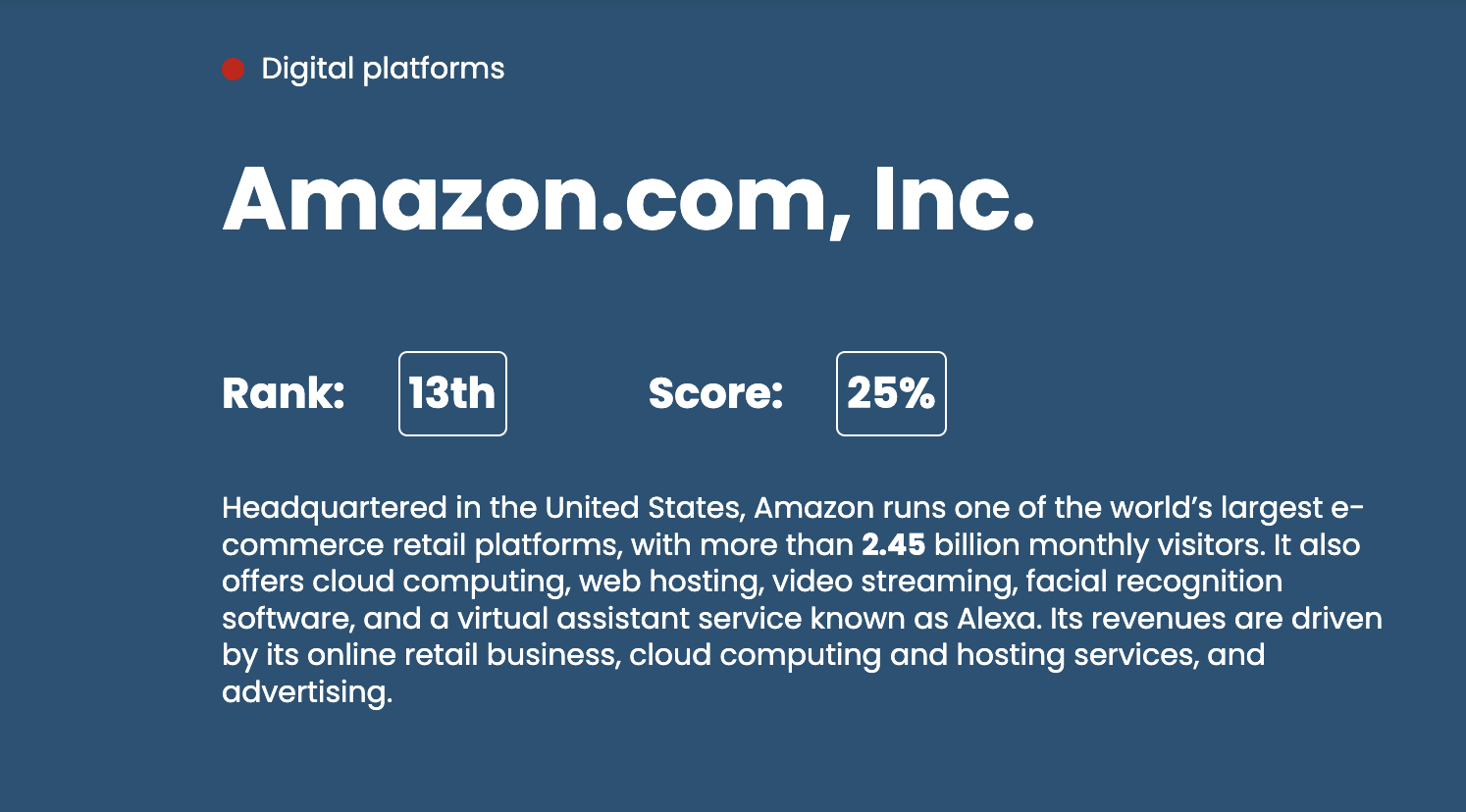 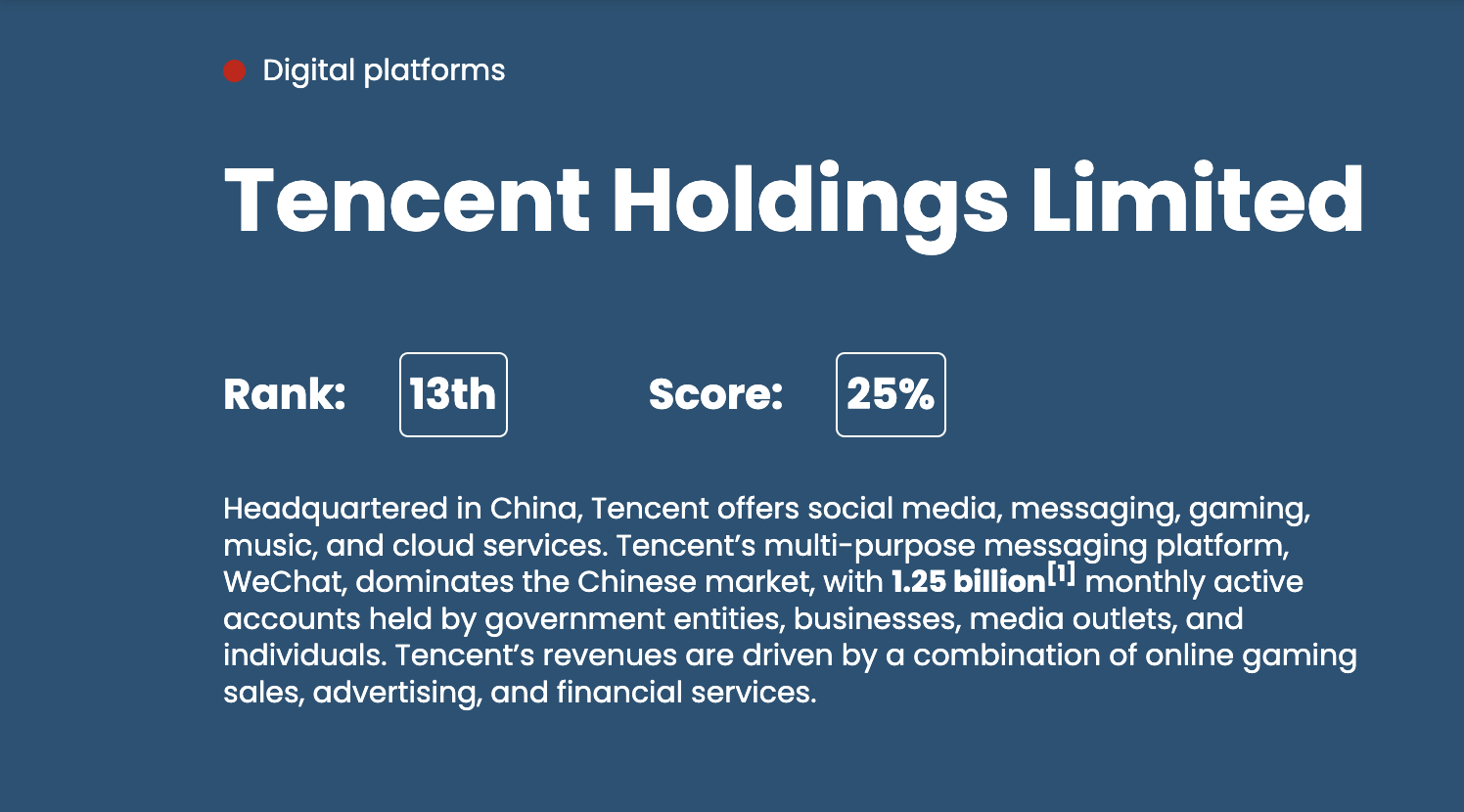 One reason the Chinese firms perform poorly on the rankings is their refusal to provide information. Ranking Digital Rights research analyst Jie Zhang writes that Alibaba, Baidu and Tencent refuse to provide the data necessary to fully evaluate their practives.

“All three Chinese companies that we rank are listed or traded on U.S. stock exchanges. They have every incentive to care about their international reputations and engagement with their stakeholders,” writes Zhang. But, she notes, the firms are more strongly incentivized not to run afoul of Chinese leader Xi Jinping and the ruling party. The firms are keeping their heads down amidst “China’s protracted crackdown on Big Tech, which Xi describes as an effort to reduce the ‘disorderly expansion of capital.’”

Ultimately, Ranking Digital Rights regards transparency as a disinfectant. “Companies can no longer feign ignorance of the negative impacts that their technologies can have on our rights and our democracies,” the report says in its key findings. “Whether during elections, pandemics, uprisings, or even war, they now have extensive data and experience from which to draw, and they must apply both to craft policies and practices that respect and promote the rights of all.”