How Social Media Fanned the Flames of Israeli-Palestinian Violence

Israeli and Palestinian extremists are leveraging each other’s social media content to radicalize their own publics and escalate violence, argues Adi Cohen.

The human and political ramifications of the recent violence in Israel and Palestine are still developing. Even as shattered buildings and lives are examined, it is important also to look at how the conflict played out in the digital realm. Social media played an integral role in the conflict, raising significant questions about the responsibility of platforms in times of war.

Consider the evidence. For instance, hours after the ceasefire in Israel and Gaza went into effect, popular far-right accounts on Israeli social media were already consumed with new, provocative content: videos uploaded by Palestinians in Jerusalem showing themselves mocking Israeli cops in the Old City and inside the Temple Mount/Haram Al Sharif compound next to Al-Aqsa mosque.

The videos gained virality instantly on social media. Jewish Supremacy activists and supporters interpreted the videos as mounting evidence of both Israeli police and government incompetence in controlling violence against Jewish Israelis. One popular right wing pundit tweeted a demand to “break the bones of whoever mocks cops”. The head of “Lehava”, a Jewish supremacy organization, wrote on his Telegram channel: “We lost Temple Mount[…]we need to take it over again[…]to expel the mosque and gentiles from the compound and from the land [of Israel at large]”.

Hours later, police did raid the compound and also made arrests following these incidents, but none of that was mentioned on this telegram channel. This chain of events is similar to what we’ve seen throughout multiple incidents over the past two months in Israel and the Palestinian territories. While on the global scale platforms are used to demand justice and human rights, they are also the very accelerators of violent escalation, abused by extremists for propaganda and radicalization.

Over the past weeks, content that has been uploaded and celebrated by extremists on one side has been quickly disseminated by extremists on the other side as a call to action, often resulting in physical escalation on the ground. When platforms did take down  some original content that was flagged by users or by government authorities, the actions of social media companies appeared to be too little too late. According to recent reports, as violent riots against Jews and Arabs escalated in Israeli cities to an unprecedented level, the Israeli Prime Minister vocalized the idea of disabling access to social media in Israel as a way to mitigate violence.

None of this is new. Tensions have been growing for months in East Jerusalem, driven by Hamas and far-right Israeli groups attempting to gain ground in radicalizing their own publics.

Throughout April 2021, a series of TikTok videos showing attacks on Jews in Jerusalem went viral particularly among pro-Palestinian audiences. Thousands of users paid the posters of the videos with the most valuable social media currency there is: following and liking their channels and challenging other users to create copycats.

But engagement with this content did not come just from the cheering side. Those videos quickly skipped from the pro-Palestinian social media ecosystem to the Israeli one. While mainstream Israeli media outlets focused attention on questioning TikTok policies and the police’s ability to keep the peace, on Israeli far-right social media channels those videos, often without any context about eventual police intervention, were shared to make the point that the Israeli public must take things into their own hands in Jerusalem.

On April 20th, a 30 second medley of TikTok videos showing attacks on Jews in Jerusalem was posted by “Lehava” on its social media channel. It was an invitation to a protest in East Jerusalem, necessitated by what the far-right Jewish supremacist organization described as a lack of action by the police. Noticeably, this invitation came after TikTok took down the videos and announced an investigation. But the platform had acted too late, as copies of the videos continued to be shared on other platforms and channels.

One of the most popular Israeli far-right Facebook pages, “The Shadow” (>500k followers), owned by Israeli musician Yoav Eliasi, experienced an annual peak of close to seven million video views in April 2021 alone. During that month, Eliasi uploaded copies of at least five different TikTok videos that gained over one million views on his page, featuring attacks on Jews in Jerusalem, often accompanied by captions cautioning the demise of Israel and making comparisons to what happened in Europe during the 1930’s. 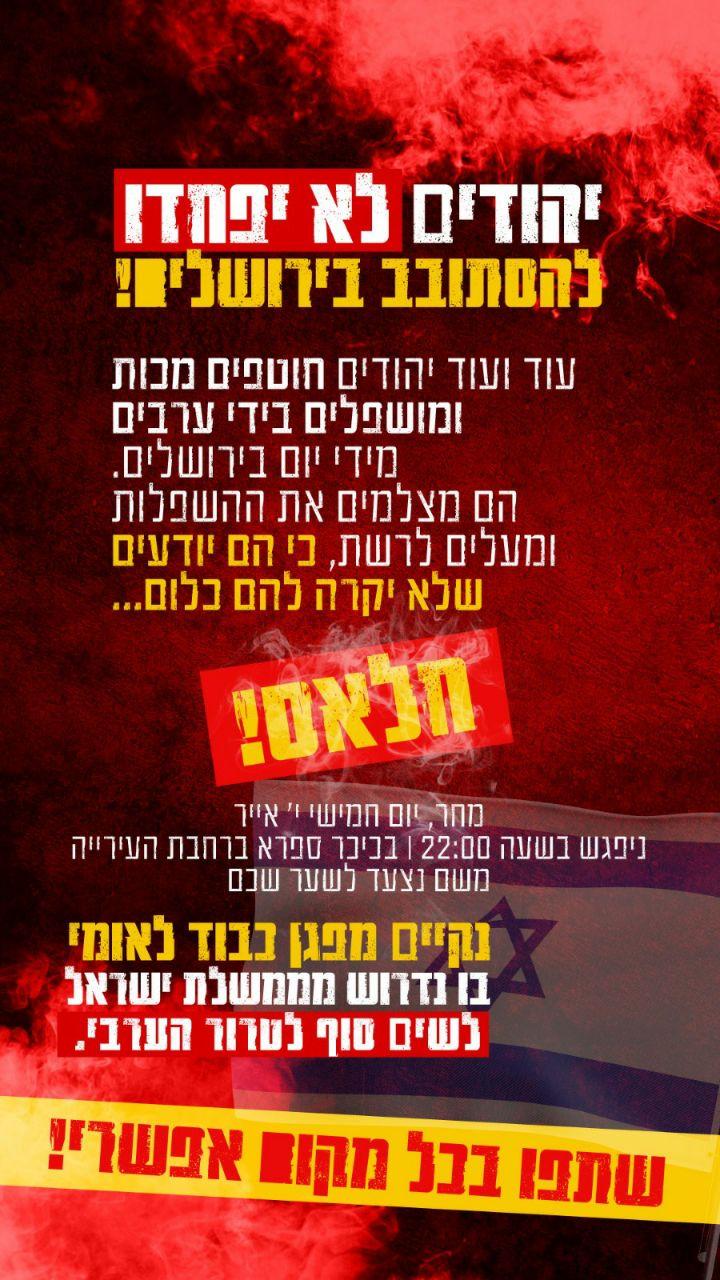 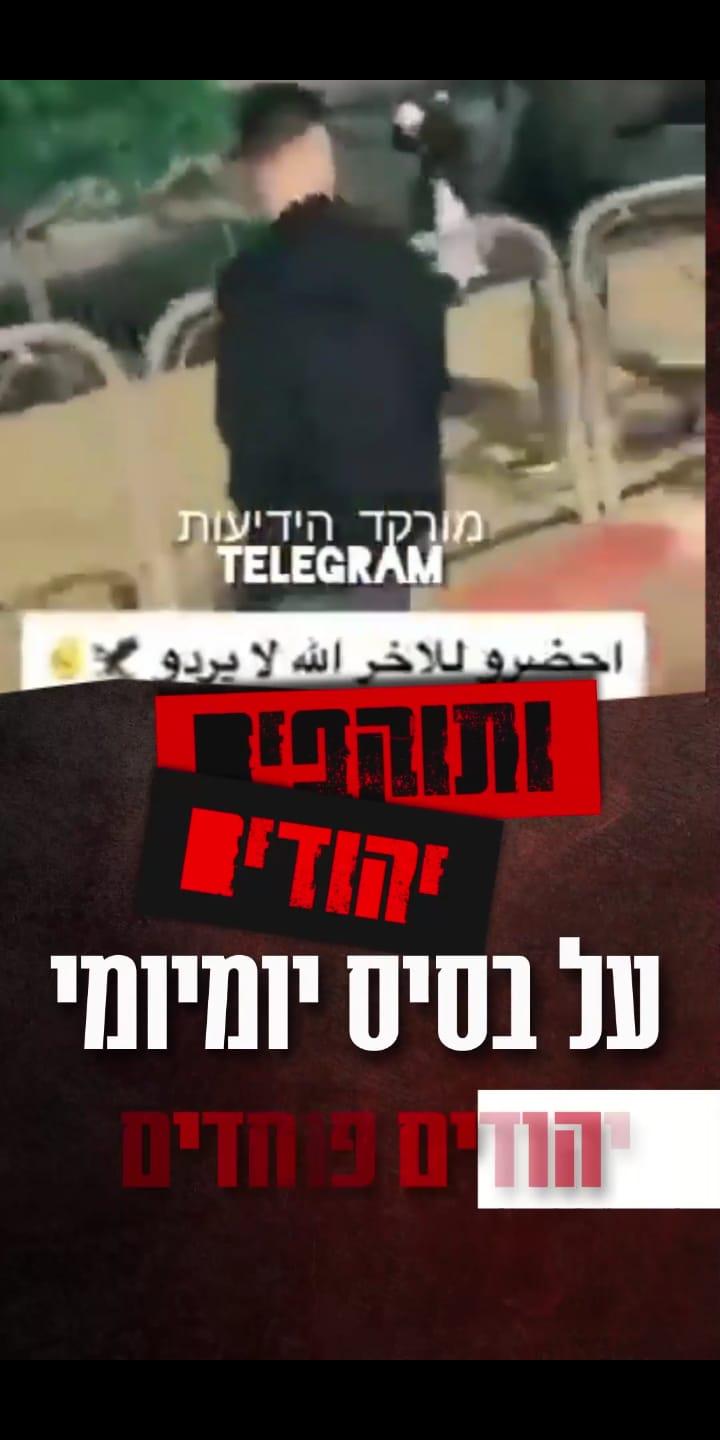 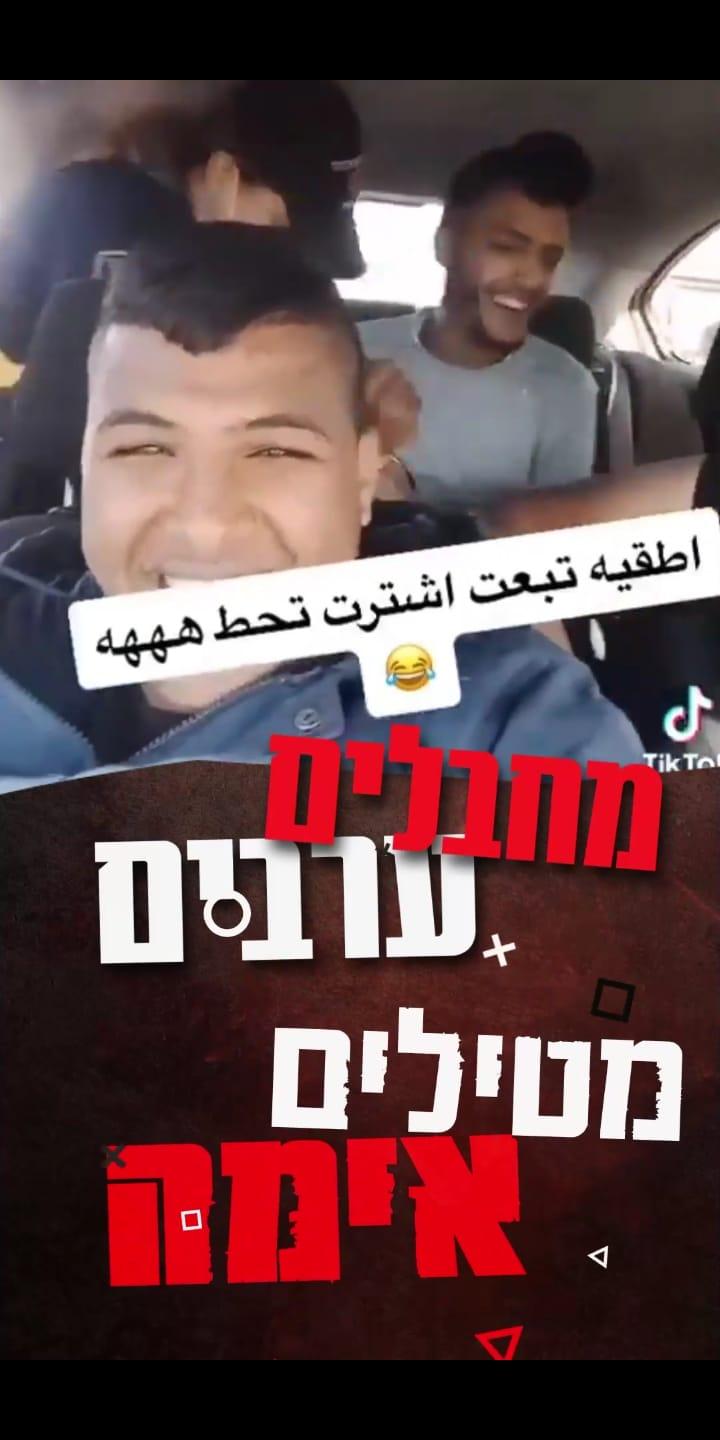 Snapshots from the “Lehava” video. Caption of the invite: “More and more Jews are beaten up and humiliated by Arabs every day in Jerusalem. They are filming it and uploading it online, because they know nothing will happen to them. ENOUGH!”

One of the posts on “The Shadow” Facebook page, sharing a TikTok video featuring an attack on an orthodox Jew in Jerusalem’s light rail.

The celebratory tone of the violent TikTok videos against Jews seem to have perfectly served the needs of extremists on the Israeli far-right. Even prior to the Lehava-organized protest, Israeli journalists flagged calls and preparations for violence on far-right Whatsapp groups. They were right: the night ended with over a hundred Israelis and Palestinians injured and dozens arrested, raising the tension to a higher level.

But cross-pollination of extremists through social media was reciprocal, and worked on the Palestinian side as well. According to CrowdTangle data during April and May 2021, dozens of posts and tweets in Arabic, with over 10 thousand engagements across Twitter, Facebook and Instagram accounts supporting Hamas or Palestinian causes, including from pages administered in Turkey and Lebanon, featured Israeli far-right posters. The Hebrew posters called for Jews to visit the Temple Mount compound during Jerusalem Day, an Israeli holiday commemorating the unification of Jerusalem (the occupation of East Jerusalem), which coincided this year with the 28th day of Ramadan.

One Palestinian spokesperson from Gaza tweeted one of these posters to his 330k followers, claiming “the proportions of the preparations to break into Al-Aqsa mosque by the Zionists this year are terrifying” and calling all Muslims in Israel and the Palestinian territories to fortify the compound. Pro Palestinian accounts on Twitter, Facebook, and Instagram started using the hashtag اقتحام_28_رمضان# (#Storming_28th_Ramadan) during April 2021, often pointing to different posts and articles by extremists Jews.

Though extremists in Israel have been trying to bring more Jews to the Temple Mount/Haram Al Sharif compound, entering it is considered extremely controversial, and even prohibited by most orthodox and ultra orthodox Jews due to theological reasons.

To illustrate the difference between far-right Jewish extrmists hopes and the reality, the Hebrew posts featuring the invitations to come to Temple Mount got only several hundred engagements on Facebook and Instagram, while the pro Palestinian posts, featuring the same invitiations, were engaged over 10k times.

And so, while no Jewish extremist entered the compound on Jerusalem Day or the days before, Israeli police clashed with hundreds of Palestinians who gathered in the compound during the last week of Ramadan, to defend it from extremist Jews.

As Jerusalem Day came to an end, Hamas shot rockets from Gaza to Jerusalem, and Israel retaliated in what turned out to be operation “Guardian of the Walls”. The cross pollination effect continued throughout the war, as footage of rockets and riots was shared on Jewish supremacy Whatsapp and Telegram groups, once again in attempt to prove Israeli police incompetence and drive calls for action, resulting in several lynching attempts and violent attacks of Arabs.

The violent attacks over the past couple of months in Israel and the Palestinian territories were celebrated, encouraged and in some cases organized online. The fragmented information environment enabled extremists from the Israeli and Palestinian sides, as well as foreign actors (according to reports, Israeli intelligence suspects Iranian activity on Telegram and Twitter), to escalate tensions on the ground by disseminating misinformation and propaganda to their respective audiences. When each extremist group “cross pollinated” the other side’s misinformation and propaganda, often adding misleading framing, for its own benefit, they accelerated the escalation to violence. The key question going forward is what responsibility do social media platforms have in times of violent conflict, indeed war, as they are used overtly and covertly by stakeholders to escalate the violence?

According to Israeli reports, social media platforms did enhance content moderation efforts as they relate to the situation on the ground. In fact, Facebook set up a special operations center to monitor the conflict, and Facebook lobbyists Nick Clegg and Joel Kaplan met with Israeli and Palestinian leaders. The company took down content, and removed groups and accounts of far right activists from its apps. TikTok, Twitter, and YouTube took down hundreds of videos and posts after they were flagged to them by Israeli Ministry of Justice. However, by the time much of the action was taken, the incitement had already occured, and extremists are already building the infrastructure for the next escalation.

Of course, haphazard content moderation, often automated, has its own problems. Censorship- whether overt or inadvertent- is a key concern. Human rights groups point to the necessity of preserving the documentation of violence, in the hopes that perpetrators can be held to account. But what to do when such content is being used and abused- sometimes out of context- in real time to promote more violence?

But clearly, more effort needs to go into technical and human solutions to prevent the automatic upload of violent acts, to include bullying of people. Online platforms must enact more rapid and aggressive response measures and adopt a more holistic approach to prevent such dynamics. If platforms have to take down posts documenting and celebrating violent attacks, it is proof their moderation protocol is inadequate as content has already been copied, disseminated and results in devastating consequences on the ground. While progress has been made on this front, particularly since the Christchurch massacres, there is still a ways to go. Social media companies have not yet figured out how to surge resources to problem areas at a scale or speed sufficient to prevent the types of problems described above.

Another issue is contextualization. The current affordances of most social media platforms do not do a great job of providing context around events. Platforms should consider mechanisms to include the post facto amendment of information related to content. For instance, when Hamas shot rockets on Tel-Aviv, some TikTok videos celebrated with exclamations such as “Just wait and see Allah SWT will finish Israel”, attracting thousands of likes and hundreds of supportive comments. What would it mean if after the event, when facts are ascertained, TikTok added a disclaimer that explained the toll of the incident, the response it elicited, and the subsequent toll on Palestinians? What if similar amendments were made to content celebrated by hardline Israelis?

If online platforms do not adopt more proactive protocols to ensure extremists are not abusing them, we might see more countries, not only authoritarian ones, weighing the option of taking matters into their own hands by disabling platform access in times of crisis. Like the conflict in Israel and Palestine, there are no simple solutions. We need more creativity and experimentation urgently- before the next shots are fired.

Adi Cohen
Adi Cohen is Memetica’s COO, building tools and methods to detect and tackle threats and harms online. Previously, he was an Intelligence Director at Storyful, and an OSINT journalist, researching forms of online extremism, disinformation and misinformation. He is the Co-Founder of Israel Public Policy Institute (IPPI), where he headed the Disinformation Program.